Novara, Italy, September 8, 2015. First friendly match for Italy’s Igor Gorgonzola Novara and first victory for the runners-up of the Italian league. Meanwhile, the club celebrates Tijana Malesevic’ silver medal with Serbia national team at the 2015 World Cup in Japan.
Despite missing still nine player, busy with the respective national teams, Igor Volley (with a mixed team including five players from the senior squad and seven players from the junior teams) enjoys the first game and the first victory of the new volleyball season. Luciano Pedullà’s girls won the first test-match of the new season, played last afternoon in Pala Terdoppio (Novara) against Settimo Torinese (team competing in the second division of the Italian national league). The game was played with an unusual “formula”: in the first part, the teams played nine mini-sets starting from 17-17 and Novara won 4 of them, while Settimo Torinese won 5. Then the teams played two regular sets with Igor Volley winning both of them (25-19, 25-20). Igor Gorgonzola Novara started the game with Bosio (setter), Wawrzyniak (opposite), Masciullo and Rousseaux (spikers), Mabilo and Rivetti (middle-blockers) and Bruno (libero) while Schirò, Chiara Bosetti (younger sister of Lucia and Caterina, Italian national team players), Zannoni (gold medal at the under 18 world championship just few weeks ago), Bartesaghi and Corroux joined later the game.
“We have to work hard to improve and increase our skills but we started well”, says Luciano Pedullà who will soon leave Novara to join the German national team in preparation of the European Championship. “We still miss a lot of players and for sure this makes all harder, but I am satisfied about the work that players and coaches are developing”. Now the team will visit Settimo Torinese on Friday for a re-match.
Meanwhile, the club celebrates the great result achieved by Tijana Malesevic and her national team at the World Cup. The Serbian spiker and her team-mates gained a wonderful Silver medal and also achieved the right to participate at the next year Olympic Games of Rio 2016. 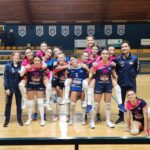 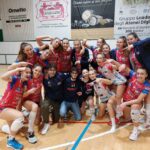