•    Samantha Bricio helped Imoco Volley claim a small lead in the first set (12-8) and the hosts extended it to 18-10 with the help of Robin de Kruijf. This was enough for CONEGLIANO to rally to a compelling 25-13 win.
•    The second set followed the same plot with Imoco leading the way (12-7) as Bricio and Kimberly Hill joined forces to deliver a terrific performance (20-14); NOVARA attempted a late comeback but the hosts held onto their advantage to double the lead in the match (25-18).
•    The course of the game changed in the third set with the score remaining close through to 11-11; Cristina Chirichella and Lauren Gibbemeyer helped the visitors edge ahead at the second technical time-out (16-13) and with Imoco Volley struggling in defence, NOVARA extended their lead to 23-16. However, that was not the end with Bricio scoring some aces and taking CONEGLIANO to a three-point deficit at 20-23 before NOVARA finished it off at 25-20 after winning a video challenge.
•    Igor Gorgonzola set their sights on the tiebreak when leading 5-2 in the fourth set but Bricio restored equality very soon; after that, the hosts were the dominant force with Hill, Bricio, Anna Danesi and Samanta Fabris producing a massive 25-14 win to seal their 3-1 victory.

Kimberly Hill, player of Imoco Volley CONEGLIANO: “We played against them three days ago, this time we managed to get another win, the most important thing was to start this round well and keep the home advantage: we did it playing maybe our best game this season. We are on the right way.”

Celeste Plak, player of Igor Gorgonzola NOVARA: “We played our worst game this season, especially in the first two sets where we were not focused. Now we have to think about tonight’s mistakes and try to get back starting with the next match against Fenerbahce.” 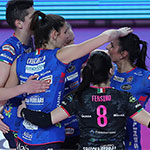