Yesterday was an emotional day for Sara Anzanello. The former Italian national team player is returning to competitive Volleyball two and a half years after undergoing liver transplantation. She will be celebrating her comeback in the city where she spent most of her career, Novara, playing with the young ‘stars in the making’ of Igor Gorgonzola in Italy’s B1 division.

On Tuesday an emotional press conference was organised in Novara to celebrate the return to competitive sport of a player, Sara Anzanello, who has one of the most impressive resumes around.  Sara underwent liver transplantation two and a half years ago after a life-threatening illness suddenly stopped her career.

The Italian middle blocker, who was born in 1980 in San Donà di Piave (Venice), has a long-term bond with the city of Novara, where she arrived at the tender age of 19 (when the club was still performing in the second division of the Italian national league) and where she remained for ten years, until 2009, winning various titles in Italy and in the European Cups as well.

During her stay in Novara, she also won a historic gold medal at the 2002 World Championship in Berlin with the Italian national team. On September 15, 2002, Sara helped Italy claim their only world championship gold medal to date and exactly 13 years later she announced her return to competitive Volleyball after a long break. Her life changed in March 2013 when she was diagnosed with life-threatening hepatitis and as a result she had to undergo liver transplantation. One year ago, she joined the staff of the Italian junior national team (she was an assistant to the Team Manager) but she actually never lost the hope she would be able to play Volleyball again.

On Tuesday she shared her wish and her challenge with the same club that offered her the first contract as a “pro” back in 1999.

Sara Anzanello will be working hard to be ready to play and will be on the roster of the second team of Igor Gorgonzola NOVARA, which is composed solely of U18 players and will play in the B1 league (the third division of the Italian national league). She will also be a testimonial for the club in all charity and promotional events and, moreover, she will be an important role model, as a player and as a person, for all the young girls of the club’s junior teams.

«I feel so happy» she says, «and honoured for having received the chance to be again part of this club and right now I am really focussed on fighting hard to be back on the court soon. It is a tough challenge, I had a lot of difficulties after my health problems but I am used to fight daily to reach out for new goals. Now I want to play Volleyball again, because Volleyball represents all my life since I was a kid. I know I have to work hard for another few months in order to be ready but I am not scared and really determined to go for it».

Meanwhile, the club welcomes back Noemi Signorile (who joins the team after working for a whole summer with the Italian national team) and, after having won also the second test-match with Settimo Torinese, gets ready for the friendly with Chieri appointed for tomorrow. 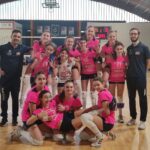